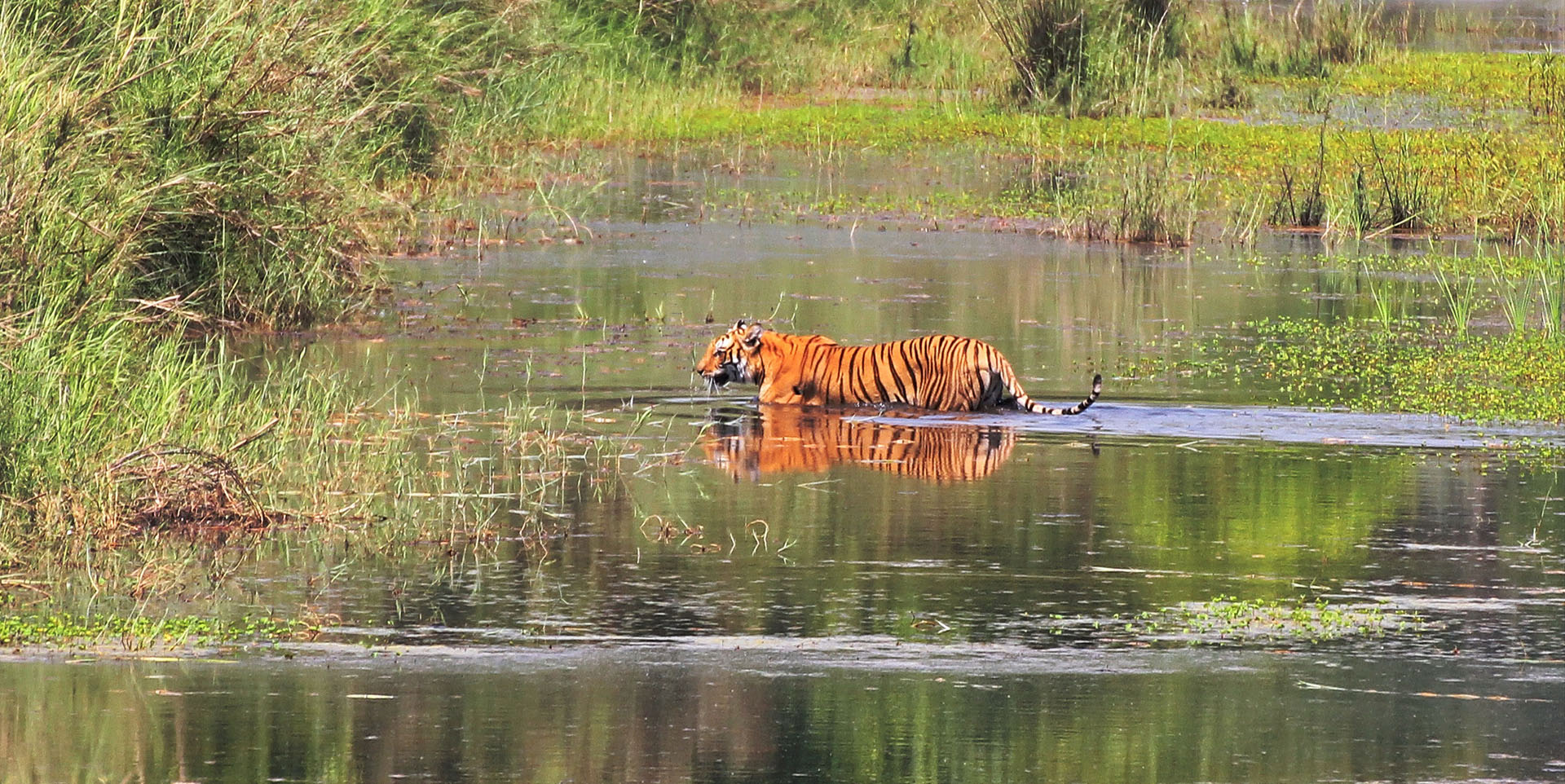 Bardiya National Park is the largest and unspoiled national park of Nepal Covering an area of 968 km2 of Nepal’s Terai adjoining the eastern bank of the Karnali River in the Bardiya District. This was established in 1988 as Royal Bardiya National Park. The park is surrounded by idyllic villages and fields inhabited by an indigenous ethnic group named the ‘Tharu’ who have their own unique language, customs and traditions. The badriya National park is reputed for its rich biodiversity. The vegetation in the park ranges from early successional stage tall floodplain grassland, established on the alluvial floodplain of Karnali, Orai and Babai river systems to the climax stage, sal (Shorea robusta) forest, extended on relatively dry flat lands and slopes of the park are revegetated and are dominated by grass species. The faunal diversity of the park includes 53 species of mammals including endangered mega herbivores like rhinoceros and elephant, more than 25 species of reptiles, over 400 species of birds, 121 species of fishes and an unknown diversity of mollusks and arthropods. Also you can enjoy Elephant safari and Jeep safari to see wildlife. Bardiya national park is one of the most diverse in Nepal for flora and fauna and a walk in the jungle, Rafting in karnali will help you to spot different types of bird and other wildlife along the riverbank. Elephant, deer, wild boar and rhinos are often seen drinking at the River. Tharu culture program, camping in Bardiya National park is an amazing experience. Birdwatching, it is the most attractive part of Bardiya National Park because, there are more than 400 varieties of bird found in Bardiya national park.  Crocodile breeding center, fishing, you can enjoy fishing as well as rafting at Babal River which is the best destination of Nepal.

In the early morning our vehicle will pick you up from your hotel in Kathmandu and proceed to Bardiya National park. The journey will take about 15 to 18 hours. Lunch is served on the way in hotels on Prithvay highway connecting Kathmandu and Pokhara views on the way include Hills, Farmland and rivers. But the journey is a bit tedious by bus at it takes long time. If you prefer we can also arrange to take you to Bardiya by Air to Nepalgunj and from there three hours drive to Bardhiya but it will cost extra.

Wake up have breakfast and get ready to Jungle walk where you can see the wild national animals like : one horn rhino,wild elephants, tiger and bird as well as wild sightseeing of Bardiya National park. After lunch we will go for Tiger tracking and Birdwatching. It is an amazing   opportunity to see a Royal Bengal Tiger and many species of birds found.

Next day we will start our journey towards  Karnali River where we Start canoe riding and rafting on Karnali River and this is the best opportunity to spot different kind of wild animals like: crocodile, dolphins etc.

We will start this day from Elephant back safari. It will be around 3 to 4 hours safari getting view of wild animals.  We will take a pack of lunch. After elephant safari we will take lunch and will go to visit typical Tharus Village and get to view various Tharu cultural programs.

After early morning tea we will go to visit some random place around the hotel to experience there local lifestyle . Get back to hotel and pack for return to Kathmandu.